Good to see the mainstream media taking notice of this issue created by monumentally stupid MPs more concerned with virtue signalling than whether the scheme ever had a chance of working in practice.

It has taken them a few years, but finally the MSM is catching up with the disastrous smart meter roll out:

Are you fed up with your smart energy meter? Mike O’Brien is. He used to use one of the devices, 53 million of which are due to be rolled out across the country by the end of 2020. “I had an early version,” Mr O’Brien told The Telegraph this week. “After a while I barely looked at it, didn’t use it.”

The difference between you and Mike O’Brien, however, is that in 2008 Mike O’Brien was Minister of State for Energy at the newly-created, Ed Miliband-led Department of Energy and Climate Change (DECC), which launched Britain’s smart meter revolution – the biggest and most expensive in the world.

I find it impossible to put into adequate words my disgust and contempt for these so called environmentalists who sacrificed both truth and humanity in pursuit of their cause.

It turns out they didn’t just come across the dying bear the day it was filmed: it was spotted at least two days earlier by Paul Nicklen. He must have had a satellite phone with him when he saw the bear but the only call he made was to his film crew — he made no attempt to find a local conservation officer to euthanize the bear, which would have been the right thing to do.

The bear’s emaciated, near-death stagger1 was simply too tantilizing to pass up (video needs action: an emaciated dead bear would not been nearly as effective). Mittermeier claims they…

More fake news from the Biased Broadcasting Corporation. Given their charter and massive publicly funded budget it is astonishing how they continue to get away with this. A shameless bunch of propagandists long overdue withdrawal of our licence fee.

Now the BBC has jumped on the “record temperature” scam, set off in the Washington Post last week:

Parts of the world are sweltering in record temperatures – and it’s not a problem confined only to summer in the northern hemisphere.

Records are being broken across the globe – so where have things been particularly bad? And why is this happening?

Only $2.8B left! Only in the field of climatism could that be see as a serious shortage of money. Perhaps they should stop now and give it back?

Ructions as poor financial management and zero dollars from the US drain the UN’s so-called ‘green climate fund’. Even agreeing an agenda was a major struggle.
H/T Steve Milloy

Disputes between rich and poor nations at the UN’s flagship climate fund are intensifying as the money runs low.

A meeting of the Green Climate Fund (GCF) board in Songdo started unevenly on Sunday, as co-chair Paul Oquist was detained by political turmoil in Nicaragua, leaving Sweden’s Lennart Båge to run the session single-handed.

With developing countries complaining their priorities were not properly represented, it took nearly two days to agree on the agenda for the meeting.

Nick Hunn recently provided a detailed review of recent Smart Meter advertising by Smart Energy GB which proved conclusively that nothing about the programme is smart.

It turns out that Smart Energy GB don’t have anyone on board who can do basic electricity use calculations and as Nick explains (my bold):

Smart Energy GB have received over £190 million from DECC and BEIS to fund the overall marketing campaign, so they can’t claim that they cannot afford to check the figures – these are all schoolboy mistakes.

This programme is recognised by many to be a massive waste of taxpayers money though there is no indication that anyone in government is going to hold their hand up and put the it out of its misery.

The sad thing is it doesn’t matter how much the data goes against the predictions, even very reasonable people seem impervious to being swayed from their belief in climatism.

I can think of a few with whom it would be nice to image that in years to come I’ll have that conversation where they start “You know what, you were right all along…” and I’ll respond politely “That’s all right – how could you have possibly known…”

Many people, particularly on the left in my experience, genuinely care about the environment but have got into a state where they think just because they care (and presumably skeptics don’t) any action is justified, despite the obvious direct costs, waste of resources, opportunity costs and many obvious practical downsides.

Shipping in the Gulf of Ob is paralysed and the situation complicated, icebreaker company Rosatomflot says. | The Independent Barents Observer

Via The Barents Observer :

It is late June, but the winter has not abandoned the Gulf of Ob. The shallow bay, which houses two of Russia’s biggest Arctic out-shipment terminals for oil and gas, remains packed with fast ice.

It has created a complicated situation, Rosatomflot says. The state company which manages the Russian nuclear-powered icebreakers, confirms that independent shipping in the area is «paralysed» and that LNG carriers and tankers are stuck.

The shipping companies had expected the Gulf of Ob to be free of ice in the course of June and that icebreaker assistance would not be necessary. They were wrong.

According to Rosatomflot, there appears to be a need for icebreaker services in the area at least until after…

The RSPB long ago stopped caring about birds in favour of anything to save the planet from climate change.

As the Saddleworth Moor fire continues to spread, experts blame the fire’s severity on the ban on controlled burning: 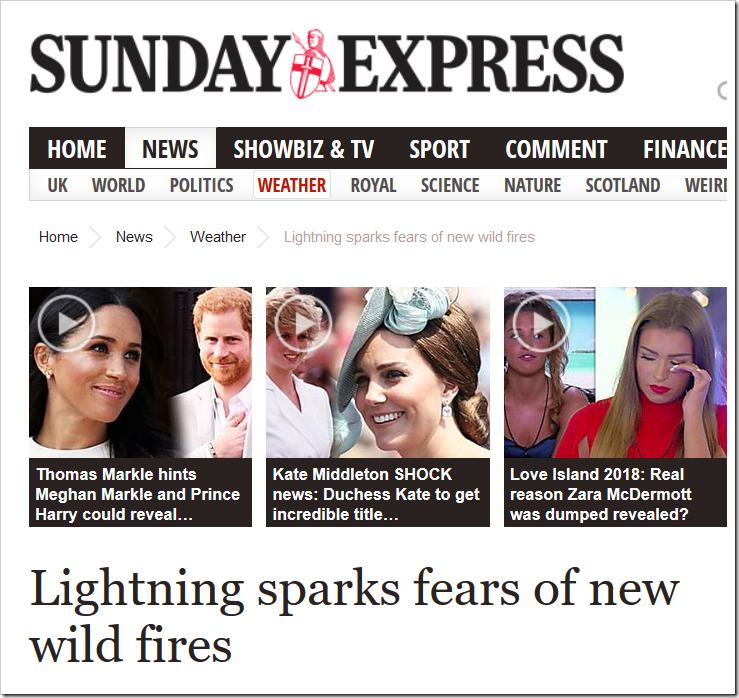 Fires have been raging on Saddleworth Moor since last Sunday, while another has been burning in Mid-Wales since Thursday.

Forecasters have issued a yellow weather warning for thunder and lightning in the south-west and South Wales.

A spokesman said: “Given the dry, warm conditions obviously the lightning could lead to a wildfire risk. The storm will be quite impactful and will see surface water and potentially localised flooding.”

Firefighters declared a “major incident” yesterday, as two blazes converged on the West Pennine Moors above Bolton. More than 80 were deployed.

On Saddleworth Moor in the Peak District, over 160 firefighters and 100 soldiers were tackling the seven mile fire.

Locals blamed a ban on controlled burning for the wild fire. It was…

Nissan Leafs fail to live up to manufacturer’s claims. From the BBC:

Owners of Nissan’s new electric Leaf say they were given misleading information about the car before buying it.

They say charging the Leaf can take three times longer than claimed on Nissan’s website.

Others are unhappy that the range on a single charge is not as good as the 235 miles (378km) they were promised.

Nissan admitted that charging times can vary, but denied there was a problem or that any customers were misled.

The Advertising Standards Authority is now considering whether to launch an investigation into the issue.