Matt Ridley is right – divesting funds in fossils fuels is about as idiotic a thing as it is possible to imagine. We would have a world where it is no longer possible to run a conventional power plant because we have made fossil fuel artificially uneconomic. Time to lay your bets on whether nuclear and/or renewables would be ready to fill the gap and keep your local hospital, school, supermarket, etc running on a cold winter’s day. Of course, as he points out this madness would be unsustainable and there would be great opportunities for the sane to make a killing on buying temporarily depressed stocks. Either way those in the know will continue to make a fortune out of climate speculation. 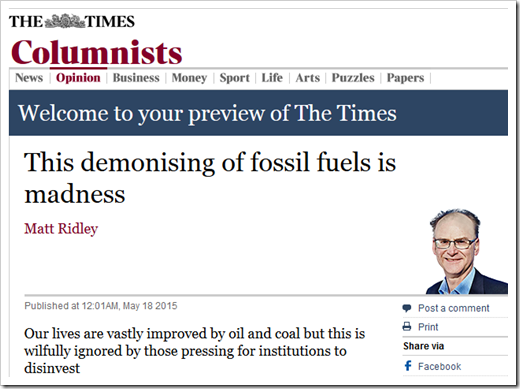 Matt Ridley has another sensible piece at the Times:

Institutions and pension funds are under pressure to dump their investments in fossil-fuel companies. The divestment movement began in America, jumped the Atlantic and has become the cause célèbre of the retiring editor of The Guardian, Alan Rusbridger. The idea is that if we do not “leave it in the ground”, the burning of all that carbon will fry the climate.
Some are resisting: the Wellcome Trust has politely declined to divest, saying it thinks it is better to keep the shares so it can lean on company executives to decarbonise; the University of Edinburgh unexpectedly voted last week not to divest, using a similar argument; and Boris Johnson has just rejected a motion by the London Assembly to divest its pension funds of fossil-fuel shares. The Church of England has cunningly confined its divestment to “thermal…

I wouldn’t want to be in Marge Dwyer’s shoes and look forward to watching this story unfold.

A series of connected frauds surrounding research into climate change and related questions at Harvard has come to light because an environmental advocacy group had falsely accused Lord Monckton’s distinguished research colleague Dr Willie Wei-Hock Soon of the Harvard-Smithsonian Center for Astrophysics of having failed to disclose a funding conflict in a paper in the Science Bulletin of the Chinese Academy of Sciences. Dr Soon, like all his co-authors, had received no funding for his research into climate sensitivity modeling. That did not stop Dr Charles Alcock, the Center’s director, from allowing it to issue a statement alleging Dr Soon had failed to disclose a conflict of interest and claiming that it proposed to “investigate” him, when in fact it had itself negotiated a contract with…